The Journey of a Quilt

I am here to tell you the story behind the Calgary Modern Quilt Guild’s 2016 Quiltcon Charity quilt.  This quilt’s journey started back in April of 2015, when The Modern Quilt Guild announced its Quiltcon Charity Quilt Challenge. For this year’s challenge we were instructed to create a quilt with the theme of Improv with Intent. They also gave us a colour palette of Red, Blue, Yellow, White, Off White, Grey and Black. These were the perfect colours for us here in Calgary, since they are the colours of our city.

This is where I enter the story. I took up the challenge and proposed to the guild that we accept this challenge from the Modern Quilt Guild. The Guild was with me. We mulled over ideas throughout the summer. But it was after Rachel Elliott saw another member’s photo of the Tipis at the Stampede Indian Village that is was finally decided on. Our theme was to be Tipi. This subject has great resonance in this city, because Stampede is a festival held here every year and the Indian Village has always been a large part of it. We also have several First Nations near Calgary.

At the end of summer I was also privileged enough to take a class on Improv Quilting with Intent from Cheryl Arkison. She helped me come up with some ideas of quilt blocks and quilt designs for this quilt. 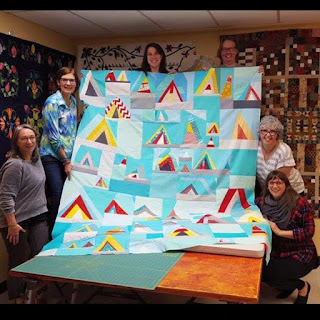 So by fall of 2015 we had everything we needed to start creating this quilt.  With help and advice from Bernadette Kent, I created kits that the members could take home and create blocks. We also arranged sew days that members could attend. But it really came down to November’s sew day-- that is when the quilt really came together with the help of Philippa Gelinas, Jodi Antoniuk Tse, Kathy Tims, Diane Lehodey Amundrud, Kelly Kay Spurlock and Rachel Elliott, who banded together to create the binding, sew more blocks, and help design the final quilt layout.

Once we had a finished quilt top it was ready to be put into the hands of our excellent long-arm Quilter, Mary Dylke Nee Parkinson. She really knocked it out of the park for us. The quilting was a perfect complement to the quilt top that we had created.

The next stop on this quilt’s journey was to Rebecca Cleaver Burke, who applied the binding by hand and it's hanging sleeve.

Once the quilt was complete, it was time for its photo shoot. Erin Cavallin, Ashleigh Marie, Philippa Gelinas, and I headed out on one of the coldest days in January 2016 to photograph our completed quilt. 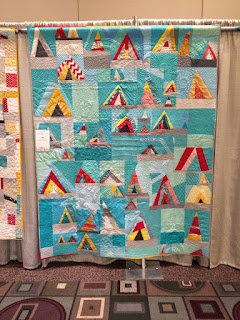 The next step on the journey of this quilt was a big one. It was off to Pasadena, California. That is where it was displayed along with other Guilds’ Quilts from around the world for 4 days during The Modern Quilt Guilds’ Quiltcon Show and Conference. 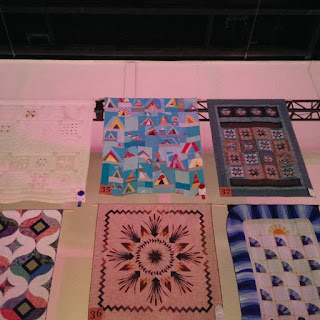 Once the quilt was back home, it started on its journey to raise money. We ended up pairing with Ghost River Rediscovery. This organization works with First Nations youth, and helps them reconnect with their heritage. The best way to do that for them was to hold a raffle. We had 36 members selling tickets all over town. We attended the The Calgary Pow Wow and had great support from the First Nations people there. The quilt was even entered into the 2016 Calgary Stampede creative arts and crafts competition. It received a first place ribbon in its category of Modern Quilts pieced by entrant, quilted by a second person. 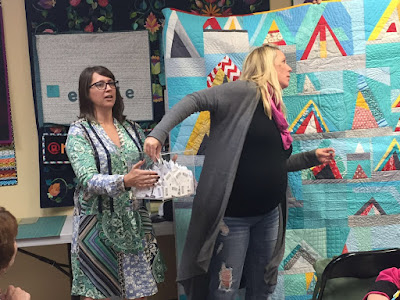 And now this quilt’s journey is almost finished. On Thursday, September 15, 2016 all 1460 raffle tickets were collected into one box and the drawing was held. One of our members, Becca Cleaver sold the most tickets, 100! The lucky winner was declared Lisa Kampel. She isn’t a member of our guild but does do some sewing and quilting herself. One of our members, Julie Vine, is her co-worker and was able to deliver it to her the very next day. Julie told me that Lisa was over the moon about winning this quilt. This quilt’s journey has ended.

I am so happy that we were able to raise $2920 for Ghost River Rediscovery. It also makes me very happy that the owner of this quilt loves it.

The Journey of a Quilt

photo by  Ashleigh Marie I am here to tell you the story behind the Calgary Modern Quilt Guild’s 2016 Quiltcon Charity quilt.  This q... 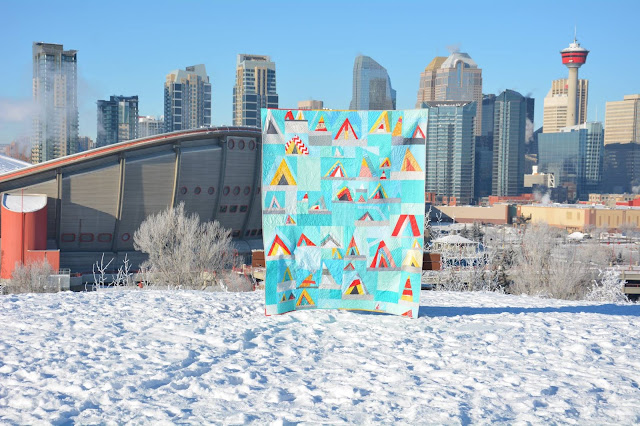 Time to prepare - Summer Cut It Up Challenge